My PhD journey: from the hustle and bustle of India to the Grand Duchy of Luxembourg

I was born and raised in Mumbai, India. Most of my life was spent in the northern suburb of Mumbai, far from the city Centre. As the lifeline of the city – the local train was my favorite mode of transport. It allowed me to traverse the length and the breadth of the city at great speed. Any Mumbaikar, (i.e., the inhabitants of this massive city), will have at least 50 stories to tell about their train journeys. These journeys are where conversations happen, and friends are made because you meet the same people taking the 5.16 pm local to the northern suburbs every day. It’s true that the city runs on a clock. The hustle is real, and everyone is trying to make the most of being in the city of dreams. I spent most of my formative years in this city and then moved to Pune. Pune is also a city very close to Mumbai.

I started my Masters in Sociology in Savitribai Phule Pune University in 2017, it was here that my identity as a researcher began to take shape. I started looking at my position in the wider society more critically. I gradually understood the necessity for a critical and reflective social enquiry that questions the givens and the obvious, while striving for a more open, thinking, and self-reflective social order. A course on urban studies opened my eyes to what lies in the underbelly of the glamorous world of the metropolitan city. The city I loved, Mumbai, became the field of my investigations. It got me questioning, what exactly is urban? How are urban cities designed? What are the socio-economic, political - economic aspects of urban planning? What are the issues of urban agglomeration? Urban overcrowding, issues of identity and economic status made me look at urban space more critically and helped me explore the many nuances that exist. The available literature then pushed me to engage with the array of lacunae in research on urban studies.

Because I was a city girl; the growing problems of the ‘urban spaces’ naturally pulled me to focus my research in this field. The SURREAL project combines all my interests. It focuses on the issue of ‘public health’ from a transdisciplinary, systems approach with ‘urban’ as its field. As cities become these strategic locations where everything is concentrated; the list of the issues affecting the city are endless. The COVID-19 pandemic only opened the floodgates exposing the public healthcare systems and the many problems that it grapples with. My individual research focuses on the concept of embodiment of space and the necessity for a dialogue between the public and those who make policies. I will be focusing on citizen science as a potential methodology that creates opportunities for this dialogue and games as a potential method.

Apart from fulfilling my research interests, the SURREAL project also gives me the opportunity to work in a country vastly different to my own and to interact with people from diverse backgrounds and cultures. The first time I arrived in Luxembourg was the first time that I realized how enormously huge India is and how extraordinarily diverse the demographic is in India. I remember having discussions with my colleagues at the University and I remember them being in a state of disbelief when I mentioned that the University, I did my masters in is not very far from where I lived. They asked me “how far?”. I replied, “Oh! Just a 4-hour drive” – which based on their reaction seemed to be quite a large distance to commute. It is interesting to see just how differently we assess a distance based on where we come from and the length of distance, we are accustomed to travelling.

One of the most difficult things for me is getting used to the weather. I arrived in Luxembourg at the start of winter, and I remember feeling cheerful because I always liked the cold when living in India but when I did not see the sun for five days, I realized why most Europeans are so fond of the sun! The monotonous grey weather is difficult to get used to. On the other hand, I was able to experience snowfall for the first time ever in my life and - oh boy! – I found it to be the most magical thing to experience! It was also the first time that I experienced Christmas markets. It was a very fulfilling experience to just be a part of the holiday spirit and to be able to celebrate.

To my surprise, I found Luxembourg to be quite multi-cultural. I have met people from Iran, India, France, Dubai, the Netherlands, Belgium, Ukraine, Belarus, and many other countries. One can get by with English almost anywhere in Luxembourg but if you try to interact with people in French or Luxembourgish you tend to get a warmer reply!

I come from a country with a population of 1.38 billion; it took me a while to get used to the fact that I will never see so many people together in Luxembourg. Strangely enough, I miss the sounds and the smells of the streets of India. I miss the chai and I compensate for this longing by cooking food that brings me closer to home.

All things considered; I am delighted to have the opportunity to work in Luxembourg with the SURREAL consortium. I envisage learning a lot about the world in general and about myself in the coming years that I am here. 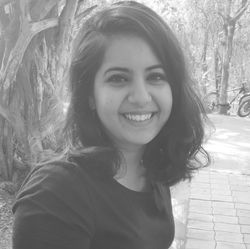 ESR
Previous blog
Introducing policy analysis through the conversation between two early-stage researchers - Part 2
Next blog
The challenges and origin of SURREAL - an interview with Prof. Dr. Martin Dijst